Colin Bass, Memoirs of a Minor Rock Star, From Obscurity to Oblivion

Invisible Cows and Andy Walsh will support Colin Bass on Dec 22nd, 2018, at the Shiloh in Cwm Penmachno. All proceeds to CEFN refugee charity. 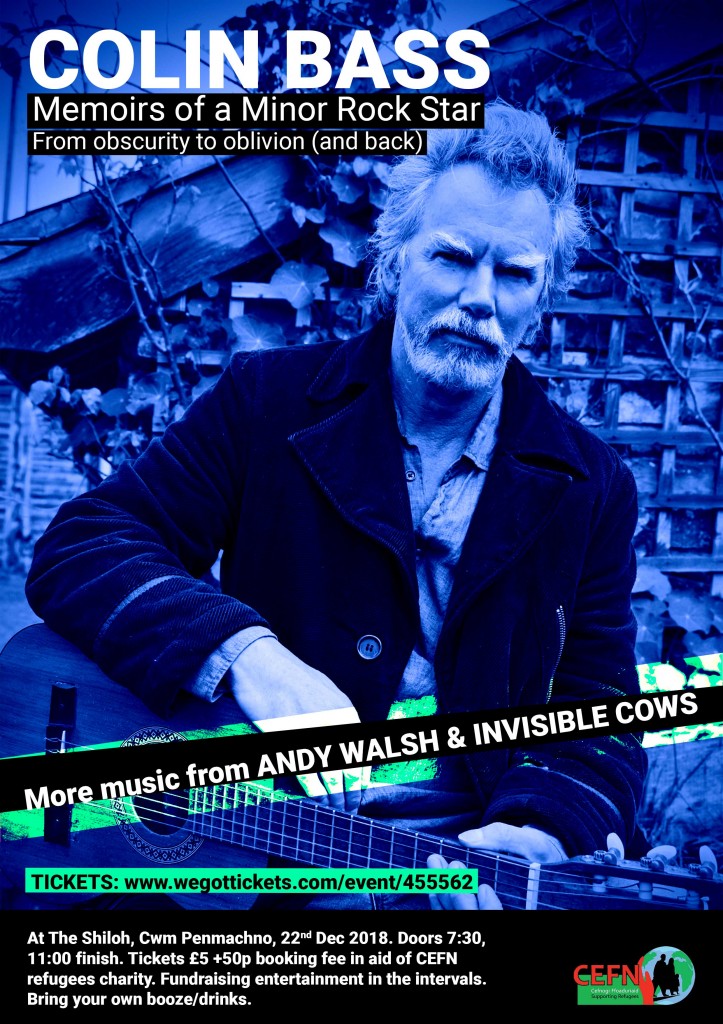 For Colin Bass, 2018 marks five decades of survival in the music business. He has performed in some of the most salubrious and many of the worst venues in the world. From Madison Square Gardens and the Royal Albert Hall to the Assembly Rooms in Wick and the Fishmonger’s Arms in Wood Green (for example). As a member of progressive rock veterans Camel, world music pioneers 3 Mustaphas 3, electric hippy combo, the Steve Hillage Band, chart-topping soul band The Foundations and many other even more obscure ensembles, he has travelled the world in wildly varying degrees of comfort.

In the 70s one of his first compositions to be released on record was hailed by the influential newspaper, Melody Maker, as ‘a desperately poor piece of songwriting’. In the 90s another of his songs became a multi-million-selling hit in Indonesia. He’s still waiting for the cheque.

Now he sets out to disprove the saying that if you can remember the 60s you weren’t really there (spoiler alert: he fails). Nevertheless he’ll probably make some stuff up and ramble incoherently and play a selection of his favourite songs. Maybe some of yours too. Maybe not. Whatever, it’s in a good cause. Do come along!

Tickets are available at WeGotTickets.